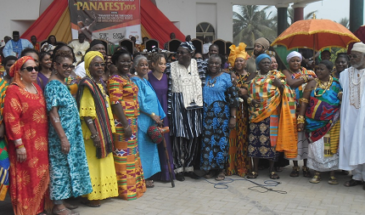 Arrive Accra; meet assist and transfer to Hotel. There will be an orientation which includes a discussion on Ghanaian history and culture; a fashion show with tailors and dressmakers from whom you can order custom-made outfits will be in attendance.

Full day Tour of Accra, visit the W.E.B. Du Bois Center honoring the life of one of the most prominent Pan-Africanists who chose to live and work in Ghana. Independence Square, Accra’s open-air ceremonial grounds where all national celebrations are held. Continue to the Kwame Nkrumah Mausoleum and museum, a tribute to Ghana’s first President. This park formally called the Polo Grounds, is where Dr. Kwame Nkrumah declared the independence of Ghana.

A Domestic flight to Tamale. The Northern part of Ghana has so many significant housing architecture and the different diversity of culture and ethnics. Tamale City tour will be a great time to explore and also their Savanna markets with a wide range of cultural heritages stuffs.

Depart to Salaga Township. Meet with the traditional leader and tour the site where the slave trade started in the former Gold Coast. In Salaga, you will find families whose ancestors were slave raiders, slave chains and shackles are still kept in some of the family homes. The atonement will be sealed by villagers washing the feet of participants as an act of humility and a plea for forgiveness. This ceremony, designed by the villagers themselves, is a symbolic apology for the acts of their ancestors.

Continue to the market site where the slaves were sold, known as the “Salaga Slave Market.” Lay a wreath at the grave site commemorating those who did not survive the slave trade. The day will end with a joyous celebration, including traditional drumming, dancing and a healing feast that includes the sharing of food between the descendants of the slave raiders and of the slaves who were taken to the new world.

Enjoy breakfast in your hotel. Depart for the drive to Kumasi. En route, stop at the former slave markets of Kintampo and Assin Bono. Enjoy this scenic but haunting drive through the land where the slave trade took place. Notice the change in climate and terrain, which has a direct bearing on the population of Africans that the slave traders targeted. Visit the Kintampo Waterfalls to experience the cool, invigorating atmosphere created by nature and savor the breathtaking view of the cascading waterfall. Continue the drive to Kumasi. Upon arrival in Kumasi, check-in at your hotel and relax.

Enjoy your breakfast at the hotel. Afterwards, depart for a drive to Kumasi, the seat of the Ashanti Empire. Explore the legend of the famous Ashantis at the Manhyia Palace Museum. There you will get a sense of a day in the life of an Ashanti ruler (Asantehene). At the museum, you will also obtain firsthand information on the legacies of the Ashanti kingdom, a regal history that dates back to 1700 and is told with relics and artifacts.

Enjoy a drive through the city of Kumasi to view monuments dedicated to the memory of the great Ashanti people. End the day’s your at the National Cultural Center, featuring the Prempeh II Jubilee Museum and the studios of various potters, brass and batik makers.

A visit to the Ashanti craft villages. Learn about woodcarving in the village of Ahwiaa, known for the talented craftsmen who fashion royal stools, walking sticks and fertility dolls from wood. You will have the opportunity to purchase a variety of hand-carved items. Your next stop is the village of Ntonso, where artisan’s hand-stamp patterns on cotton cloth to make Adinkra textiles. Later, visit Bonwire, where the famous Kente cloth is handmade on looms in a time-honored tradition passed down through generations. Observe the Kente weavers creating the traditional Kente cloth.

After breakfast, prepare for a visit to the Elmina Castle. Another infamous castle and slave dungeon, Elmina was built by the Portuguese in 1482 as St. George's Castle. This castle was the first European structure built in Sub – Saharan Africa. Explore the grounds and rooms full of haunting history. Stroll down to the beach for a memorial ceremony where each pilgrim will throw bread into the waters in remembrance of ancestors. A wreath with a candle will be solemnly pushed out to sea as a respectful moment of silence is observed in remembrance of those who died in the middle passage.

After lunch, enjoy a walking tour of the colonial town of Elmina. Elmina’s rich history is captured in its buildings. They tell the stories of the people of Elmina and their interaction with those who came from outside West Africa. Visit the colorful Asafo houses, which were used as a place for warriors to prepare mentally and spiritually before going to war. They are wonderful examples of how art is used in the daily lives of Africans.

After dinner, you will have the opportunity to participate in “Reverential Night.” There will be candlelight processions and a vigil to commemorate the Africans who died in the slave trade. There will also be a moving ceremony and re-enactment of the slave passage through the “Door of No Return,” followed by a midnight declaration of Emancipation Day. This is the highlight of the Panafest celebration.

The Cape Coast Castle was warehouses built by the Europeans to house slaves and was the final transit point for enslaved Africans before being shipped off to the Americas and the Carribeans. You will have the opportunity to visit the slave dungeons as well as the final resting place for two ancestors whose mortal remains were returned from the USA and Jamaica and re-interred in Ghana.

The Emancipation Day Celebration is opened with a Grand Durbar of Traditional Chiefs and people of the Central Region. Witness this grand, colorful and spectacular event that showcases the pomp and pageantry of Ghana's traditional rulers, dressed in rich Kente and adorned in glittering gold jewelry. Discover the African rhythm in you as you dance to the beat of the 'Fromtomfrom' drums.

Next, visit the Arts Center, where you will have an opportunity to use your bargaining skills to shop for artifacts from Ghana and West Africa in an open-air market. Early evening transfer to the airport for check-in and departure.

Be the first to review “PANAFEST GHANA 2019” Cancel reply