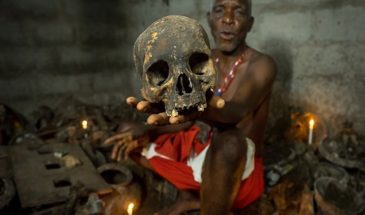 All along the Coasts of Togo and Benin, voodoo is a religion that has been passed on by the ancestors and is still…

IN THE GULF OF GUINEA

Upon arrival at the Airport, you will be assisted with your baggage and transferred to your hotel.

Our journey will start with a city tour in Lome, the vibrant capital of Togo, and the only African city having been colonized by Germans, British and French. It is also one of few capital cities in the world which sits on the border with another nation (Ghana).

Lome is at the cross roads for different people, trade and cultures, and it remains very cosmopolitan. It is where tradition and modernization meet. These elements have led to the development of a special identity reflected in the life style of its inhabitants and in the architecture of the town.

Special attention will be paid to:

the central market with its famous Nana Benz, women who have concentrated in their hands the market of expensive pagne (=cloths) coming from Europe and sold in all West Africa;
the colonial buildings in the administrative quarter with a flavor of colonial time;
the fetish market, where an eclectic assortment of all the necessary ingredients for love potions and magical concoctions are sold.
From Lome we will move towards the tropical forest surrounding Kpalime, a trade-center, and a town with a colonial past where we will visit the market and the art center.

In the morning, we will go for a long walk in the forest to discover a magic world: the majesty of trees, the cheerful greeting of the people living there, the echoes of animals, the sounds of tam-tams, the green emerald light filtered through the branches.

A local entomologist will explain to us the butterflies and insects native to this forest. He will also initiate us into the art of painting with natural colours.

In the afternoon we discover Kpalime, a town with a rich colonial past which is now an important trade center. Visit of the market and of the arts center.

Moving north we will visit some villages. These populations came originally from the north of the country and have maintained their traditions that have keep them tied to the land of their ancestors.

We will stop to visit weekly markets and will arrive in Sokode late in the afternoon.

In the heart of the village, a great fire lights up the faces of the dancers who start moving on the frenetic rhythm of the drums. The fire dancers, in a state of trance, throw themselves into the embers, grab them with their hands and put them in their mouths; they even run them over their bodies without showing any trace of injury or any sign of pain.

Is it a matter of courage? Willpower? Magic? Such a performance is hard to explain.

Maybe it really is the fetishes that protect them from fire. We would need to prove it to believe it… and believe it to prove it….

We will leave Sokode and head for the mountains of Malfakassa-Fazao, home of the Bassar people.

The Bassar have developed and managed to preserve their traditional iron producing techniques. They will show us their old clay blast-furnace and tell us about the fusion process. Geological empirical knowledge and magical beliefs blend together in this archaic way to make iron, turning this process into an almost alchemical experience.

In Bassar you will meet the “council” and have an audience with the traditional chief in his “palace”, a spacious hut covered with a very high conical roof.

We will start our day by meeting the Kabye people: in some villages located at the top of the hills, women make nice clay pots while men work the iron and shape it by plunging it into a fire before beating it with a big heavy stone.

A track across the Atakora Mountains is the access to the mystical and ever-resourceful Tamberma people. For self-defence reasons, these people have been taking refuge for centuries in the heart of the Atakora,

A little to the East, but still in the Atakora mountains, you cross the border into Benin, and soon after meet with the Betammaribe people (also known as the Somba). Just like the Tamberma, they also build attractive clay castles, but unlike them, they follow a series of very evocative initiation rites.

Young men, between 18 and 20, have their torsos scarred with delicate and complicated geometrical patterns, convinced that these scars are the only way for them to become “real” men in the eyes of the adult community. You will meet some of those young men, who will display their scars and tell of their recollection of the initiation ceremony, and how it affected them personally.

Girls are also initiated in a similar way, although in their case, their stomachs and backs are scarred, when they are between 20 and 22 years old. Should a child be conceived prior to initiation, then the initiation rite would take place as soon as the pregnancy is discovered, for it is believed that the absence of scars could be harmful to the birth. The initiation rites form a cycle that starts during weaning, when the child’s face is scared, right through to the final rites, which demonstrate that the person has come of age as a member of the tribe. An infinite number of very fine scars on the face are a permanent reminder that you are a Betammaribe.

THE MOUNTAIN OF THE « FETISH PRIESTS »

We will meet the Fulani peoples and visit to one of their settlements.

The Fulani are mainly shepherds, and are famous for their beauty. Beautiful tattoos on their faces send messages to people who understand the language. Their beautiful slender bodies and eyes are proportional to their slowness.

Then we will leave for a nice hiking trip to discover old Taneka villages located on a mountain of the same name. Those villages are made of round houses covered with conical roofs protected at their top by terra cotta pots. The upper part of the village is inhabited by the young initiated and by the fetish priests who wear a goat skin as their only cloth and always hold a long pipe.

Dassa is the seat of an old kingdom founded by Olofin in 1385.

The town holds some sites considered the witnesses of this long lasting dynasty. A walk through the hills will take us to a sacred place where the kings used to be buried and which is still protected by several voodoos.

In Abomey, visit of the Royal Palace of Abomey which walls are decorated with the symbols representing the former kings of the Dahomey Kingdom. The Palace is now a Museum where are preserved the mortal remains of the past kings as well as a temple built with a mixture of clay, gold dust and human blood.

Ganvie, a wide stilt village. We will reach Ganvie on board of a large pirogue. The inhabitants build their houses on tick stilts and cover the roofs with a thick layer of straw. The everyday life unfolds on board of those pirogues that men, women and children guide with ease using long coloured poles. They do everything aboard their pirogues; they go fishing, they move around, they display the goods to sell on the floating market… always singing in rhythm with the movements of the poles…

On the way to Grand Popo, we will stop at Ouidah.

Ouidah is considered the “capital” of voodoo in Africa, and it is host to several ceremonies where thousands of masters, traditional chiefs and fetish priests all gather to practice their cult. The city was also one of the main slave trading ports, and even today it has an awesome air, even without the foreboding ties to the voodoo.

The slowness of the people bathed in sunlight… the remote noise of the waves crashing against the sand… the rhythm of the drums… it all represents the whispering echo of the lines of thousands of slaves who were taken on board from those same beaches.

A nice day cruise aboard a pirogue along the Mono River to discover small villages where women still extract salt using ancient techniques. Navigation will take us to an amazing estuary where the River meets the Ocean… We will stop and admire desert white beaches… We will navigate through lagoons lined with little mangrove forests… Along the coast, fishermen live in villages made of braided palm tree branches and they daily face the Ocean on board of large and artistically sculpted pirogues.

In one of these villages we will attend a Zangbeto dancing performance.

The Zangbeto masks are very tall and are covered with colored straws. They represent wild non-human spirits.

The mask wearers belong to a secret society and keep their identity hidden, as the non-initiated cannot know who they are. When Zangbeto comes out, it’s an important event for the village, and the performance guarantees protection against bad spirits and malicious people. The spinning movement of the mask symbolizes the spiritual cleaning of the village, and Zangbeto will also perform miracles to prove its powers.

AT THE HEART OF THE VOODOO LANDS!

All along the Coasts of Togo and Benin, voodoo is a religion that has been passed on by the ancestors and is still fervently practiced today. Voodoo is a religion passed on by the ancestors and still enthusiastically practiced today. This religion is much richer and more complex than all the European clichés that claim that Voodoo is only a vulgar form of black magic. It is quite the opposite, as Voodoo is a religion that gives meaning to the life of millions of people all over the world. We will go deep into the African “bush” to discover this cult and, in the heart of a remote village, we will attend an authentic Voodoo ceremony. During the ceremony, along with the sound of the drums and the incantatory songs, some Vodun may take possession of the adepts giving way to truly amazing trances.

In another village, we will visit a healer. All the different people we will meet along our journey bring complex solutions that are always based on a very “simple” vision of the human being. Their anthropology systematically associates the material with the spiritual. As a consequence, there is nothing surprising in the fact that a physical disease is cured considering the patient’s spirit. Our healer cures his patients through the use of herbs and the performance of sacrifices on the various shrines filling his courtyard. We will get a chance to have a conversation with him, help him do his job and meet some of his patients.

Arrival in Lome. Free time to relax on the beach or to do the last shopping.

Day-rooms available until 6 p.m. before the final transfer to the airport for your onward flight.