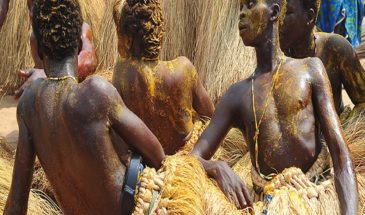 Accra You are met at the Kotoka International airport and transferred to your Accra accommodation.

Depart from Accra to the domestic airport at Kotoka International Airport for your domestic flight to Tamale Airport. Upon arrival you will be met and transferred to Mole National Park. You arrive at Mole motel, a stunning location situated on the escarpment overlooking the watering holes with a pleasant pool. The motel offers a great base to explore the park.

After a restful night, you will wake up in the African jungle for your morning foot safari, accompanied by your guide in the park with the possibility of viewing many different animals. After the morning foot safari you return back to base. You will depart 15kms on a dirt road from Mole Motel to Mognori Eco Village. In the late afternoon accompanied by your guide you will take your last game drive.

A visit to the Boabeng Fiemah Monkeys Sanctuary, Here This monkey sanctuary has no fences, the monkeys are here because they want to be. There are two types the Black and White (Geoffroy's) Colobus, and smaller Campbell's Mona. The Colobus live high up in the trees eating just leaves while the Monas are at lower heights, eating a wide variety of food, including that brought by visitors. There are said to be around 1000 Monas and 800 Colobus monkeys, that form 22 troupes within the sanctuary area.

Kintampo waterfalls is one of the highest waterfalls in Ghana. Also known as Sanders Falls during the colonial days, it is located on the Pumpum river, a tributary of the Black Volta.

The Ashanti Kingdom is blessed with rich culture and home to much pomp and pageantry. this Region is also known for its historical and mythical landmarks. the language spoken is twi, the scenic hilly Kumasi is the regional capital, the second largest city in Ghana.we visit the Okomfo Anokye Sword,an important symbol of the Ashanti Kingdom Unity that marks the spot where the Golden Stool is said to have descended from the sky and has been dig deep the groud where no man born of a woman can pull out and its said to have been in the ground over 300 years. Legend says the Ashanti Kingdom will collapsed should the sword be removed.

Visit the Manhiya Palace where is the Head of the Ashanti Kingdom resides.It is the official residence of Ashanti Kings(Asantehene)until 1974,now a museum containing treasured items relating to the Ashanti Kingdom.Enjoy a walk through the city with monuments dedicated to the memory of the great Ashanti people. Tour the National Cultural Center,which features the Prempeh II former Ashanti King museum and various studios of the brass market,potters and batik makers.

Early in the Morning we depart to Cape Coast and On the way you will stop at Assin Manso, the burial site of two former slaves from the U. S. and Jamaica whose remains were re-interred in August 1998 during Ghana’s first Emancipation Day Celebration. You will see the “Slave River” where captured Africans were washed before being confined in the Slave Castles to await shipment to the Americas and the Caribbean. The UNESCO HERITAGE SITES Cape Coast Castle and the Elimina Castle was built by the Europeans during their time in the Ghana then Gold Coast which was used as storage houses for salves during the slave trade era. Each Dungeon (Male & Female Dungeons) house about 200 slaves for 3 solid months before shipped. No Sanitation, No Light.

In the evening enjoy a performance by the Bamboo Orchestra at their musical best. The youth at the village of Mesomagor have revived a traditional art, by performing with bamboo percussion instruments to music and dance. This is a contagious dance performance that you have not seen anywhere else and you will be pulled in to display your dancing and other artistic skills.

Independence Square where you will see the enclosed flame of African Liberation,which was lit by Osagyefo Dr. Kwame Nkrumah in 1961. Ghana happens to be the first African Country to again Independence from a colonial rule in the African continent.The Kwame Nkrumah Memorial Park,final resting place of Ghana's first president and one who championed the Africa Liberation. Set in attractive gardens,there is an adjoining meseum,which contains photos,artifacts and an insights into Dr. Kwame Nkrumah's life.Adjoining the park is the National Cultural center,which is Ghana's largest outdoor arts and crafts market selling traditional crafts from all over West Africa.
One of the famous Dance Group in Accra will be requested to teach and dance for you that day.

ACCRA | EDUCATIONAL TOUR IN THE CAPITAL

Experience the Rare Life in our basic level schools and pre-schools. The Curriculums,Teaching Methods and Tools.
The Junior High Schools is also places to explore and learn about how and what are used in teaching. Our Senior High Schools cant be left out as we take a tour at the Achimota College which was then the Prince Charles School during the pre-colonial days. Its one of the oldest senior high schools in the country and has imparted so many prominent men and women in Ghana as the Former President of Ghana Flt.Lut. Jerry John Rawlings who is an alluminai and also great person like the famous George Aggerey who is recognised is the continent of Africa and the wolrd of his great impact.

Since it's an Educational Tour,there is no way you wont experience the premier university of Ghana which is the Univeristy of Ghana (Legon). The first University in Ghana and the mother of all universities in Ghana.
The Legon Business School will also be another stop to explore the school and its acadamics success over the years. Along the same stretch is the University of Professional Studies which is also a must place to tour.

The Cooking Lessons will be in the evening at the hotel.

Lome, the vibrant capital of Togo, is the only African city having been colonized by Germans, British and French. It is also one of the few capitals in the world to be on the border with another nation.

These elements have led to the development of a special identity reflected in the life style of its inhabitants and in the architecture of the town. Lome is a cross point for people, trade and cultures, a cosmopolitan city in small size.

We will pay special attention to:
The central market with its famous Nana Benz, women who have concentrated in their hands the market of expensive pagne (=cloths) coming from Europe and sold all over West Africa (it has been partially destroyed by a fire);
The colonial buildings in the administrative quarter with a flavor of colonial time;
The fetish market where one can find an eclectic assortment of all the necessary ingredients for love potions and magical concoctions.

Drive to Ouidah. Ouidah was conquered by the Dahomey army during the 18th century to become one of the main slave ports. Today Ouidah enjoys an Afro-Portuguese architecture. The laid back attitude of the locals blends in harmoniously with the thunder of the distant waves and the rhythm of the drums .On foot we visit the Python Temple and the Portuguese Fort, now a museum on the history of Ouidah and the slave trade. We end our city tour by following the “slave road” to the beach, the point of “no return” where slaves used to board ships.

We cross Lake Nokwe with a motorized boat to reach Ganvie, the largest and most beautiful African village on stilts. The approximately 25,000 inhabitants of the Tofinou ethnic group build their huts on teak stilts and cover the roofs with a thick layer of leaves. Fishing is their main activity. The village has managed to preserve its traditions and environment despite the long-lasting human presence in a closed setting; and the lake is not over-fished. Life unfolds each day around the canoes that men, women and children guide with ease using brightly colored poles. It is with these canoes that men fish, women deliver goods to the market and children go to school and play.

We move to Abomey where we visit the Royal Palace. The walls of the palace are decorated with bas-reliefs representing symbols of the ancient Dahomey kings. Now a museum listed on the Unesco World Heritage List, it displays items belonging to the ancient kings: thrones, cult altars, statues, costumes and weapons. In the middle of the royal courtyard there is a temple built with a mixture of clay, gold dust and human blood.

The Egungun is a very powerful masks secret society. Egun masks are the reincarnation of deceased people and are known and feared for their aggressiveness and their unpredictable way of moving around. Intensively coloured, masks are covered with a multitude of pieces of cloth of many red shades. They emerge from the forest and form a procession through the streets of the village, leaping towards any foolish spectator who dares getting too close. And nobody wants to be touched by the Egun because any contact carries the danger of death. Better watch out! When masks arrive they perform a kind of bull fight designed to scare the crowd but in truth they are actually greeted with bursts of laughter!

Drive back to Accra for departure