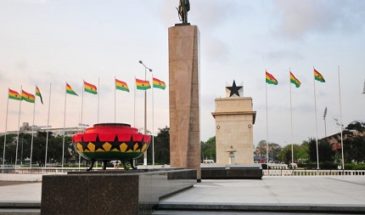 This Research Mission will explore the rich economic, cultural, and historical region that is Ghana, our ancestral home. The Motherland’s Shining Black Star!…

Arrive Accra; meet assist and transfer to Hotel. This evening enjoys a welcome dinner that will include orientation and entertainment – professional tailors will be on site for those interested in custom-made traditional outfits.

Accra city Tour consists of so many places to explore. A visit to the first President of Ghana Osagyefo Dr. Kwame Nkrumah Memorial Park, National Museum of History and Ethnography to observe exhibits that reflect the heritage of Ghana.
The W.E.B. Du Bois Center honoring the life of one of the most prominent Pan-Africanists who chose to live and work in Ghana
Visit the Arts and Crafts Bazaar.

The Makola Market in Accra is the Capital's biggest open markets where goods and services are carried out by women and men selling in the open from a variety of stuff ranging from foods stuff, vegetables, spices, tubers, plastics, fishes and many many more. A walk down to the market will teach us something and the experience is a breathtaking.

A visit Agbogloshie and the Kokomba market is another wild experience everybody can get. You will be amazed the number of vibrant young men pushing trucks while shouting in the sun for way to carry out their goods. The awesome water seller also shouting that ''It's Cool '' What an awesome experience you can get.

After breakfast depart to Cape Coast in the Central Region of Ghana; with a stop at Kakum National Park; one of West Africa’s surviving tropical rainforests. This provides an unforgettable “Jungle” experience amidst the tropical vegetation and wildlife. The forest provides the opportunity to see much of Ghana’s indigenous plant life, rare butterflies, flora and fauna monkeys. The most popular attraction is the Canopy walkway, which is made up of seven bridges extending 330 meters and hanging 30 meters above the forest floor. Lunch at Hans Cottage Botel. In Cape Coast go on a City Tour of Elmina City drive through the ancient town of Elmina. At the harbor see the colorful fishing canoes getting ready to go to sea for another night’s task of fishing. This is a perfect opportunity for the photographers in the group. This evening a birthday celebration at One Africa – own arrangements.

Cape Coast Castle which also houses the West African Historical Museum established by the Smithsonian Institute in collaboration with the Ghanaian Government in 1994. Cape Coast Castle is another restored UNESCO World Heritage Site, one of the departure points for Africans being sent to slavery in the Americas and the Caribbean. The castle is home to the “Door of No Return”

We depart to the Elmina Castle another World Heritage site. Here castle operators will guide us through all the Slave Dungeons with lectures. The Elmina castle is the first castle to be built in the Sub Saharan region and its the oldest castle in West Africa.
Assin Manso, the burial site of two former slaves from the U. S. and Jamaica; and the slave river where slaves take their bath before sent to the markets for slave masters to buy them.

The Ashanti Kingdom is blessed with rich culture and home to much pomp and pageantry. this Region is also known for its historical and mythical landmarks. the language spoken is twi, the scenic hilly Kumasi is the regional capital, the second largest city in Ghana. we visit the Okomfo Anokye Sword,an important symbol of the Ashanti Kingdom Unity that marks the spot where the Golden Stool is said to have descended from the sky and has been dig deep the ground where no man born of a woman can pull out and its said to have been in the ground over 300 years. Legend says the Ashanti Kingdom will collapsed should the sword be removed.

Visit the Manhiya Palace where is the Head of the Ashanti Kingdom resides. It is the official residence of Ashanti Kings(Asantehene)until 1974, now a museum containing treasured items relating to the Ashanti Kingdom. Enjoy a walk through the city with monuments dedicated to the memory of the great Ashanti people. Tour the National Cultural Center, which features the Prempeh II former Ashanti King museum and various studios of the brass market, potters and batik makers.

The morning will be for last minute shopping at the Arts Center. Evening transfer to the airport for your onward flight back home.

Be the first to review “GHANA RESEARCH TOUR” Cancel reply